News from Parnella Accommodation and our backyard! 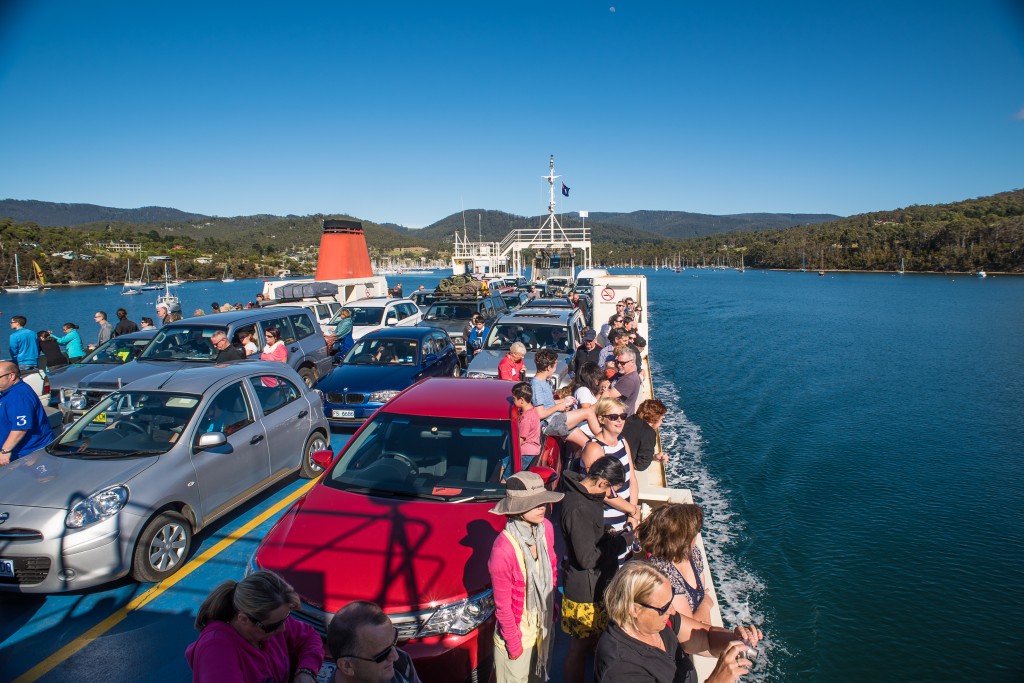 The first peak day of the new season has seen many visitors disappointed at not being able to get to Bruny Island.

Some, including a couple of our guests, were booked onto the Bruny Island Cruise being picked up by Pennicott Wilderness Journey’s bus at the Kettering office. The bus was unable to board the ferry because of demand.

This has been an ongoing problem for many years, partially solved late last year by the introduction of a second ferry. This has not been put back on the run to cope with this long weekend. Unbelievable!

The following story has appeared this morning on the Mercury News site:

A SECOND ferry will be added to the Bruny Island service from November 2.
Premier Will Hodgman today announced what he described as a new, extended-peak-season two-vessel model for Bruny Island to meet the growing demand of residents and visitors alike.
The new model would see a 44 per cent increase in capacity over a new, extended six-month higher-demand season when compared to the existing single vessel service, Mr Hodgman said.
“The Bowen (the second ferry) will join the Mirrambeena from 2 November to provide the two-ferry service right through the coming summer and until the end of March, in addition to the already contracted Easter sailings,” he said.
“In future years, the vessels will operate together from the beginning of October till the end of March.”
THE residents of Bruny Island say the second summer ferry service can’t start soon enough, with the existing ferry already “chock-a-block” at peak times of the day.
For the first time last summer, the barge MV Bowen was put to work alongside the island’s main ferry the Mirambeena to address the problem of access during high season.
Last year the service began running on December 22 and finished in early February, but the island’s every-growing popularity with visitors has the community hoping the ferry will start sooner this year.
The last meeting of the Kingborough Council’s Bruny Island Advisory Council, held earlier this month, urged the council to write to Infrastructure Minister Rene Hidding seeking early activation of the second ferry.
Bruny Island Advisory Committee deputy chair Trevor Adams said the morning ferry to the island and the afternoon ferry off the island were already extremely busy.
“The 9.30am ferry in the morning is just chock-a-block full and they have to run extra trips,” he said.
Mr Adams said the second ferry service had been a huge boost for the island last summer and over Easter.
“It helped a lot, it got the traffic flowing and there were no worries at all, everyone was happy with it,” he said.
Kingborough Mayor Steve Wass said the second ferry service had been a boost for the island and welcomed the State Government’s commitment to running the service to meet demand this year.
Kingborough councillor Dean Winter, speaking on his own behalf, said the continued inability of the island’s visitors to book online or in any other way was holding back the island’s tourism potential.
“If Bruny Island’s tourism sector — which is a very large part of the island’s economic activity — is going to grow and reach its full potential, it needs to have a 21st century booking system on the ferry,” Mr Winter said.
But Mr Adams said the island residents did not want a booking system because it could restrict local access.

Thank you for providing such a clean, comfortable, cosy house for us to stay in. We walked the Labillardiere Peninsula, ate spectacular seafood at the Hotel Bruny and saw penguins at the rookery on the Neck. The rangers at the rookery were trying to explain to other visitors where to find albino wallabies. We felt very smug knowing they were just in the garden at Parnella. We will definitely be coming back next time we are down this way.

Dear Jonathan and Sue. Thank you. After spending a week at Parnella, a whole year’s worth of ‘Sydney stress’ has just melted away. The cottage was just perfect. We have never seen so much wildlife whilst seated on the sofa. Bruny is just beautiful and coming back each day after exploring the island was lovely. Our son took great delight in feeding the sheep and saying hello to the endless wallabies and birds.

Parnella Adventure Bay … a lovely place for us

And we really liked the cute sheep. We really enjoy the feeding time. Also, we are surprised to see the white wallabies. The information provided are very useful. We are really happy living here. Thanks for the good environment and comfortable house.

Thank you for a wonderful 6 days of bliss! A beautiful cottage and you have thought of everything. We loved the privacy and the spas. Such a treat to share our afternoons with all the cute little wallabies, especially the white ones and the sheep and the birdlife. Local wines and cheeses are superb. We are dreading going back to the QLD heat. We will be back and we will be recommending the cottage to our friends.

We stayed in the 1 bedroom Bloomsbury Cottage. It was lovely. It is in a quiet spot not far from the main road and an easy commute to Hobart 20-30 min. and a short drive 5-10 min from the Bruny Island Ferry. The bed was super comfy, the heater was warm and the bathroom big, modern and clean. A nice touch was a knee rug for extra cosiness. Would definitely stay again and will recommend to anyone traveling in this area.

My bride and I stayed for 3 nights in Parnella Kettering’s “Bloomsbury Cottage”…absolute bliss. Sue and Jon ? Take a bow. Your service is excellent. Great bed …soft pillows…large fluffy white towels…( there were 2 spare towels as well!!) and self catering was a breeze due to some thought being applied to the provision of an extensive range of utensils…as well as a BBQ which was clean and in working condition. All of the wish boxes are ticked here!! delightful sunny deck …absolutely private without being isolated … and there’s more !! We stayed in 14 locations over Tasmania in 52 days and our yardstick was simple…”would we stay there ever again?”
Emphatically ” Yes”

This was one of the loveliest holiday homes we have stayed in. Equal to anything overseas. Brilliant communication with the owners made it super easy to settle in quickly. Extremely well appointed, very neat home, with quality furnishings, beautiful linen, a kitchen that had everything, laundry facilities, spa, and very cosy to boot with the added bonus of spring flowers, incredible birds and wildlife, the white wallaby and the cute sheep. We explored a huge portion of Bruny and, on the suggestion of the owners, we took a couple of the quite amazing walks. The cottage is within walking distance to the beach, it was easy to stroll down the road and enjoy the peace of those blue waters. Thank you for sharing your home with us. We will recommend it highly and hope that we can come back again soon.

Would highly recommend this cottage. The place was spotless, cozy, and quiet. Exactly what we were looking for. Enjoyed having the wallabies hanging out in the back yard. Kitchen had all the equipment we needed. The bedrooms were nice, and beds very comfortable. Enjoyed taking the fishing rods down to the jetty and catching squid. Worked well for a weekend away, and we would stay again.

Bruny Island is such a special place and now we have discovered Parnella! This cottage had everything we wanted and more for our stay. A comfortable cottage with everything you need for self-catering. So much to appreciate in the cottage grounds from bird life to the ever present Bennetts wallabies and to our delight the white wallabies every day of our stay. We have stayed in Adventure Bay before this trip but not at Parnella. We will definitely be hoping to stay at Parnella again.